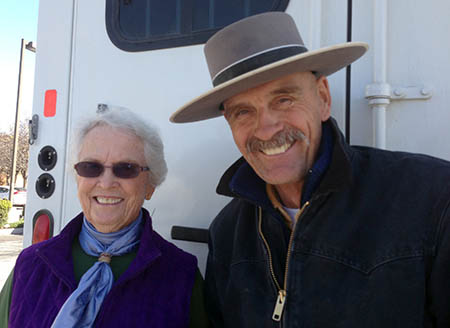 Margaret Dorrance and John Saint Ryan teamed up to write the fascinating book, Tom Dorrance - More Than A Horseman. The book is a collection of essays and stories, (including contributions from Buck Brannaman, Ray Hunt, Pat Parelli and many more),which not only reflect the admiration and respect for Tom Dorrance, but also give clues and direction to the many people who really want to develop their horsemanship skills.

Margaret Dorrance married Tom Dorrance in 1966, and Tom has said that she "pretended to have a horse problem - she got me blindfolded, haltered, hogtied and saddled. By the time I discovered what had happened, it was too late. But you know that was the best thing that ever happened to me." Since Tom passed away Margaret has continued to help, encourage and support horse people from many different backgrounds. Her knowledge and understanding of Tom's work is a gift she willingly shares with people who are passionate about their horsemanship.

John Saint Ryan was born in the UK. He spent much of his earlier life in the world of Martial Arts both as a fighter and a teacher. Throughout these times he enjoyed riding horses. In 1992 he emigrated to the USA, met Tom Dorrance and the rest, as they say, is history. He left the world of Martial Arts to concentrate and focus all his energies on becoming a better horseman. Saint Ryan's passion and interest in horses has established him as a well respected horseman and teacher. He won the US national championship in Doma Vaquera three years in a row 2004 to 2006. In 2007 he formed Galloping Gelding Productions and has filmed several documentaries on his favorite horseman and mentor Tom Dorrance, including 'Greetings', 'Feel, Timing and Balance' and 'Visits with Tom.' More information about John is available at www.johnsaintryan.com