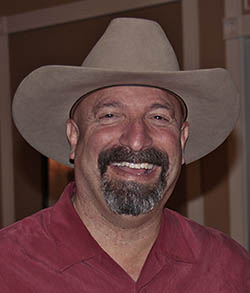 Born and raised in California, Joe Milazzo attended Pasadena City College and Art Center College of Design. Joe was drawn to a fundamental medium, pen and ink, in which the most traditional Western themes are rendered. Joe considers his ability a God-given talent. One that he doesn't take for granted. "It is an honor and a priveledge to be able to render an image and have someone want it enough to buy it and take it home with them. Nice."

In 1997, Milazzo had the honor of presenting a drawing to President Ronald Reagan. The drawing hung in Mr. Reagan’s office in Century City, California. His portrait of President Reagan and the USS Ronald Reagan are on permanent display at the Reagan Center in Santa Barbara.

His delicate, yet intricate lines and his attention to detail make him a sought after artist. Collected internationally for commissions of prominent figures for public and private collectors alike.

Milazzo has recently added charcoal to his drawing resume. This allows him to create much larger scale drawings and yet keeping the same technique. The larger drawings are even more dramatic.

Major Influences in Milazzo's career include: