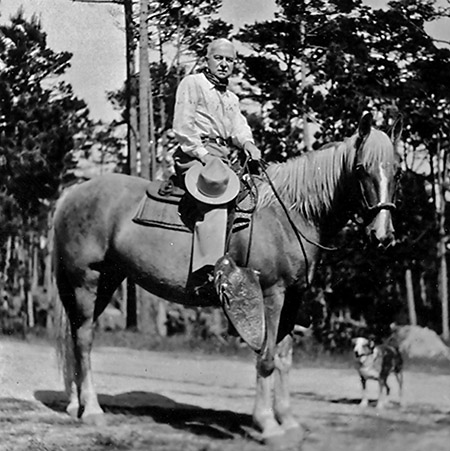 Jo Mora’s ability to translate, through a variety of artistic mediums, the essence of the old California vaquero culture, was beautifully summed up by singer/songwriters Mike Beck and Ian Tyson:

"Well colors awash on adobe, mixed with salty sea air; Filters through redwood and oak trees, it’s the Santa Lucias standing there. And vaqueros trot in to the plaza and the guitars they build and they sway; And horses and rawhide and silver, slide and spin in a timeless display. And Jo Mora told the story, all the color and the glory, and the Californios who rode through dappled green and gold, ay yi yi yi yi in old Californ."

Few artistic legacies are more interesting than that of Joseph Jacinto Mora (1876-1947). His gifts are evident in a wide variety of mediums including drawing, painting, illustration, cartooning, sculpture, photography, mapmaking and writing; their diversity being an amazing accomplishment for one person.

Here we feature 26 of Mora’s exquisite black and white prints of Vaqueros at work and play, as well as 4 of his strikingly colorful cowboy images from the gloriously illustrated children’s tale Budgee Budgee Cottontail.

Mora was born in Uruguay on October 22, 1876, moved to the eastern United States when he was a young child and then, after attending art school and working as an illustrator and cartoonist in the Boston area, spent the rest of his adult life living and working in the western United States, primarily in California.

Apart from its artistic merits, Mora's work is valued for its historical significance. As an astute observer, Mora created art that eloquently and accurately described the western land and way of life he admired, whether his subject was vaqueros, Hopi katsina figures, the Arizona landscape, turn-of-the-century Yosemite, or the California missions.

His talent in numerous mediums such as drawing, illustration, painting, watercolor, sculpture, cartooning, photography, map making, and writing leaves the viewers of his work constantly amazed at his accomplishments. "There was no limit to his abilities as far as art was concerned," explained his son, Jo N. Mora.

All Jo Mora prints, books and notecards made available with the permission of the Jo Mora Trust.