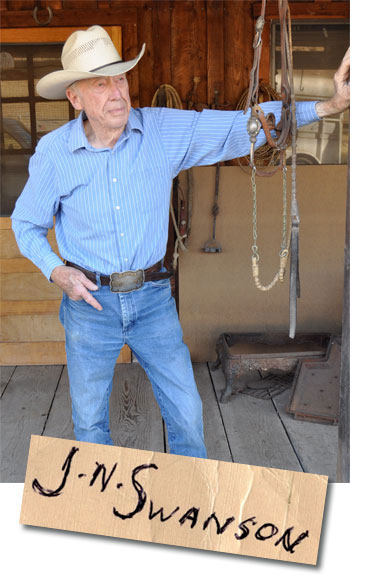 From the vast range lands of Nevada and eastern Oregon to the pastoral oak-covered hills of California, the images in Jack Swanson's work have an unerring realism. Swanson came by that realism honestly. In the early 1940's, he worked in the Tehachapi's with the last of the great vaqueros. After World War II, he broke and sold wild horses in Oregon, working with the top buckaroos in the northwest cow country. Swanson's landscapes are real because he's been there. He painted from personal observation, with a sensitive eye that could catch and hold all the movements of horse and rider.

Born in 1927, Swanson lived with his wife, Sally, on the ranch that they established in the upper reaches of Carmel Valley forty-six years ago, where they raised and trained fine stock horses. Sally still lives there and maintains the ranch just as she and Jack built it. His studio is surrounded by breaking corrals and arenas – and is the only studio known to have an indoor stall so that the artist can paint horses from life. Swanson, who is a past vice president of the Cowboy Artists of America, once taught a CAA workshop called, “Anatomy of the Horse in Action.”

Swanson's bronze sculptures and oil paintings have appeared in many top Western magazines, including Western Horseman, for which he created ten covers. In 1980, he was featured in an article in Time magazine. In 2002, Swanson was named Westerner of the Year at the Western Ranchers Beef Cooperative's sixth annual profit conference, where he was honored as a defender of property rights and ranching. “Ranchers are environmentalists,” he says. “Their livelihood depends on their good care of the range. Their families are the type of honest and hardworking people that built America. Their roots are in the land, many for generations, and their land keeps improving under their care.”

Swanson's work is collected by all types of people, from real-deal cowboys to famous celebrities. President Ronald Reagan hung one of Swanson's oils in the Oval Room of the White House. His work also hangs in the National Cowboy & Western Heritage Museum, the C. M. Russell Museum, and the National Center for American Western Art.