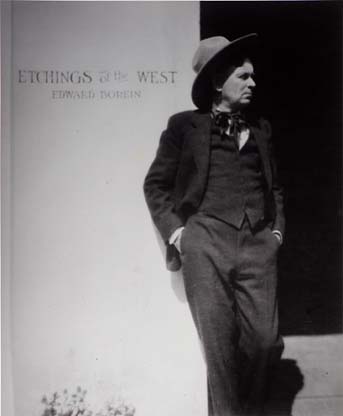 Edward Borein (1872 - 1945) grew up in the towns of San Leandro and Oakland, along the California cattle trails. His artistic inclinations became evident almost immediately; he was sketching at the tender age of five, before most children can write. The subjects available to him during his childhood--vaqueros, longhorn cattle, horses--determined his lifelong interests. Borein was encouraged by his family to pursue art studies but his formal education lasted just one month before he decided to give it up to become a cowboy.

Beginning in 1893, Borein worked ranches up and down the California coast. It was also during the 1890s that Borein began to try his hand at watercolor, oil painting, as well as pen-and-ink, but he never excelled as a painter in the way that he did as a draftsman and printmaker.

By 1900 he left the full time cowboy life and returned to Oakland and established a studio. In 1904 he began to work in earnest as an illustrator for bay area newspapers and magazines, including Sunset Magazine. The speed with which artists had to prepare work for newspapers and the monochrome, linear quality of illustrations at that time, influenced Borein significantly in his later work.

In 1907 Borein moved to New York to immerse himself in the fast-paced illustrators' world. It was during his New York years that he "studied" most diligently and mastered the technique of etching. This would ultimately set his life's work apart from his peers in American Western art.

In 1921 Borein moved with his new wife, Lucille, to Santa Barbara. He remained there for the rest of his life as a prolific and successful independent artist producing vast quantities of etchings, drawings, and watercolors. His documented watercolors alone number more than 1,000. Particularly in the 1930s, Borein produced watercolors with sparkling, vivid colors and a mastery of the tonal qualities of the medium.

Here we feature Borein’s book, The Vaquero & Other Short Stories, edited by journalist William Reynolds. It contains 25 stories - many never before published - including the title story - The Vaquero. It also features Photos of Borein & his art. From Pacific Slope Press. Limited Edition.