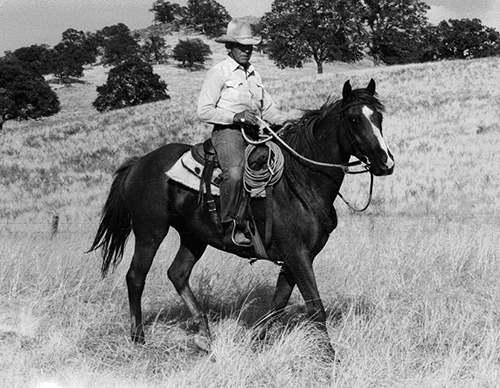 Tom Dorrance is considered by many to be the "father" of the current philosophy on natural horsemanship that revolutionized the way we look at this wonderful animal. From world renowned clinicians and trainers, to hobbyists and pleasure riders, Dorrance’s influence can be seen throughout the industry.

The sixth of eight children, Tom was born on May 11, 1910, near Joseph, Oregon. From a very early age Tom was a keen observer and learned much about people and horses from watching family members and friends. Eventually, leveraging that ability to observe and learn, Tom traveled the West helping horses and people understand the natural, gentle methods of horse training, emphasizing "feel" of the horse and observation of its responses to the handler.

According to Tom, "the part that has meant the most to the horse and me is the communication between us.  This is the part where I really had to devote a lot of thought.  I have watched horses when they are loose by themselves or loose in a group; gentle raised or wild range raised, their naturalness will show.  And by studying their actions and reactions I have been helped to understand how to present myself in such a way that the horses will respond to what I may ask of them.  This I believe is true nature. This is something I have had to develop in myself, for myself, by myself.  The True Unity and Willing Communication between the horse and me is not something that can be handed to someone, it has to be learned, it has to come from the inside of a person and inside of the horse."

As a winner of the Chester A. Reynolds Award, which was established in 1990 in honor of the National Cowboy & Western Heritage Museum's founder, he was recognized as a person whose lifestyle represents the ideals of the American West.  This award is presented by the National Cowboy Hall of Fame.

In 1994, The National Reined Cow Horse Association (N.R.C.H.A) awarded Tom "The Vaquero Award" and in 1999, The American Association of Equine Practitioners awarded Tom "The Lavin Cup". The Lavin Cup, named for AAEP past president Gary A. Lavin, VMD, recognized non-veterinary organizations or individuals that have demonstrated exceptional compassion for or developed and enforced rules and guidelines that protect the welfare of the horse.