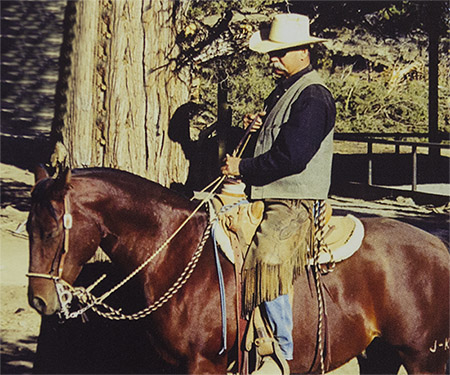 Mike Bridges is an internationally known clinician and bridle horseman in the California Vaquero Style with more than fifty years of making his living on the back of a horse.

He began learning the vaquero tradition as a teenager from his grandfather, who advised him to seek out other vaqueros to deepen his knowledge. At age 15 Mike set out to buckaroo on various ranches in California and Nevada where he learned from those who lived this old tradition. In his book, The Making Of A California Style Vaquero Bridle Horse, Mike writes; “After 55 years of working cattle, the miles I’ve ridden and long hours in the saddle, alone or with other buckaroos, was the high school and college time I spent to learn this discipline. The last sixteen years of teaching clinics in the Unites States and Europe, of imparting this vaquero style, has helped me to think through and analyze precisely how I do things in the training of this style of horse. I think that has made me a better horseman.”

Mike has been featured in Western Horseman magazine in an article by Robert M. Miller, DVM, titled "Bridges to the Past" in the May 1996 issue. Mike also wrote an excellent article for Western Horseman in July 1998 - "Vaquero-Style Bridle Bits"  - What they are and how they work. And, Mike was on the Cover of Western Horseman Magazine with the feature article on the "Secrets of Vaquero Horsemanship" in August of 2006.